Home / Our Company / About Us / Board of Directors / Ibrahim M. Ibrahim 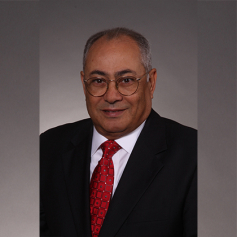 Ibrahim M. Ibrahim brings to the Board particular strength with regard to financial skills, international business skills and corporate governance skills. Mr. Ibrahim has recently retired after working for more than 40 years in leading positions for major banks in the United States and abroad. He was a Vice President and General Manger of Continental Bank in Chicago, Lebanon and Bahrain (1969 – 1984). From 1984 to 1986, he worked for First National Bank Chicago as Vice President and Head of Credit and Marketing for their Middle East head-quarter in Dubai. In 1986, Mr. Ibrahim then moved to Kuwait and stayed for more than 23 years. He was the General Manager & Head of International Business at The Gulf Bank (1986 – 2001), and General Manger, Head of International Group at Commercial Bank of Kuwait (2001 – 2004). His last position before retirement was General Manager of Al Ahli Bank of Kuwait (2004 – 2009).

Mr. Ibrahim received his MBA in International Business from DePaul University in Chicago, his MS in Taxation and his BA in Accounting both from the University of Alexandria.